SMSA presents the Fran Gerbič (one of the most important conductors in the second half of the 19th century and beginning of the 20th century) Awards. No more than three awards are presented for long-standing above-average achievements in music education. The presentation of the awards is held in April every year in Cerknica, where Fran Gerbič was born. 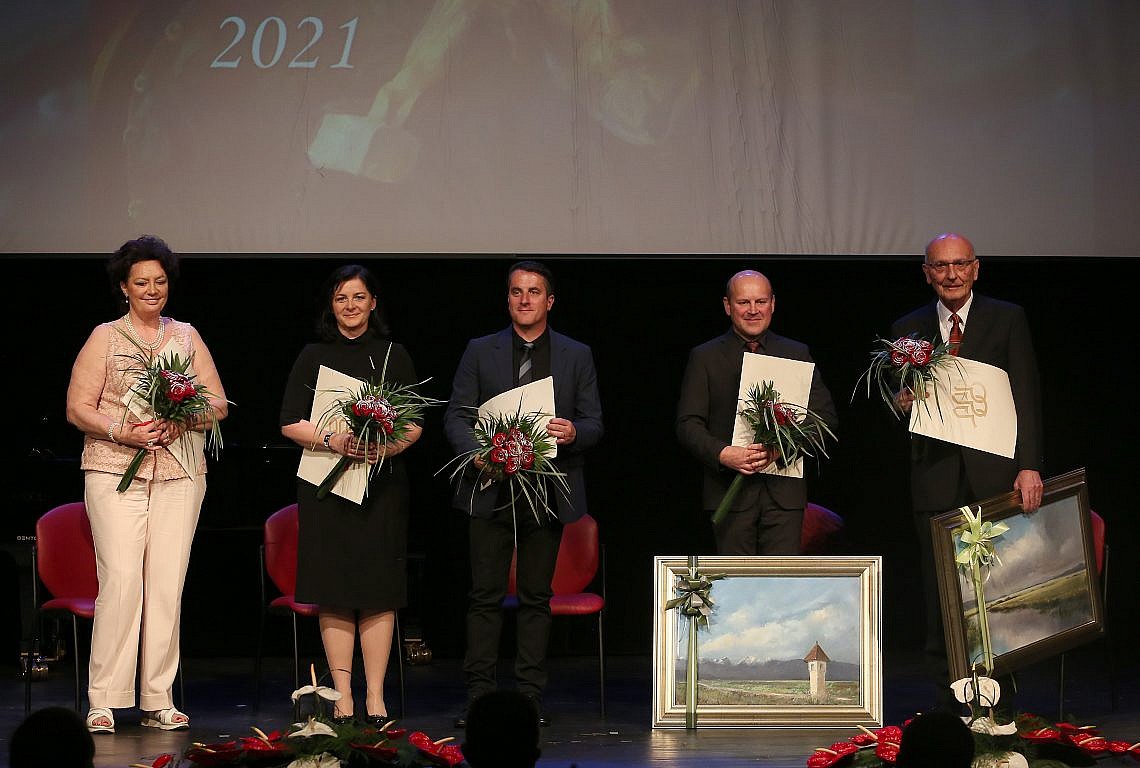 Fran Gerbič was born on 5 October 1840 in Cerknica, in the Notranjska region. Little France resided at home until 1851 and attended the public school. After that, he was sent to Ljubljana, where he finished two more grades of elementary school and then three more years at the grammar school. Since the grammar school at that time lasted 3 years, he enrolled into a preparatory school for teachers in 1856. There, he met Kamilo Mašek, a music composer and teacher from whom he obtained further knowledge of singing, harmony and playing the piano and organs. Aged 17, he was employed as an assistant teacher in Trnovo near Ilirska Bistrica on 14 October 1857. He soon received a permanent position and later the position of a senior teacher. He continued to pursue music activities. He was a church organist and started composing when he was 20. His first collection of compositions called “Glasi slovenski” (Voices of Slovenia) was self-published in 1861. It was intended for singers accompanied by the piano or men’s choirs and quartets.Gerbič – who at the time signed as France Gerbec – also participated in the establishment of the Trnovo National Reading Society and then decided to study music in Prague in autumn 1864. There, he attended a conservatory until the end of 1867 up skilling his singing as his major, the piano, composition (harmony, counterpoint, morphology, instrumentation) and many other subjects. During that time, he also issued “Lira Sionska” for one year (1866), his own monthly for church music.

After his teaching, composing, study and editorial career, young Gerbec, who issued several church songs in between, decided to become a heroic tenor at the Prague Opera House. Somewhat earlier than that, he toured his home country. In June 1869, the Croatian writer and theatre manager August Šenoa invited him to Zagreb, where he helped set up the National Opera House. In 1876, he married the Czech opera singer Emilija (Milka) Daneševa, who also worked at the Zagreb theatre. After 9 years, he left Zagreb and resided at home in Cerknica for two years because he had contracted severe pneumonia in 1878. In autumn 1880, he again accepted the job of a heroic tenor, this time in Ulm in Baden-Württemberg. But he did not stay long. In autumn 1881, he was amongst the Poles in the Galician city of Lviv. An unfortunate event when his one-year old son Viktor died just before one of his performances crushed him severely and he decided to give up the career of an opera singer. He accepted the job of a professor at the Lviv Conservatory. He taught for four years and then decided on a new adventure.

When Gerbič taught in Lviv, three patriotic societies were active in Ljubljana, namely the Narodna čitalnica (National Reading Society), Glasbena matica (Music Society) and Dramatično društvo (Drama Society). All three societies shared committed membership, but had no adequate artistic leadership. Hence, board member Fran Drenik thought of Fran Gerbič, whom he believed to be appropriate for such a responsible role. The problem was money. All three societies together could offer to pay only 1300 gulden a year – the Music Society 800, the Reading Society 300 and the Drama Society 200 gulden. Gerbič earned trice as much in Lviv. But a miracle happened. Gerbič’s sense of patriotism prevailed. He decided to take the position offered. When the Conservatory management learned of his intention, he was offered a salary increase by the same amount offered by his friends in Ljubljana. Hence, he would keep his current earnings and also receive the promised Ljubljana “bonus”. But Gerbič replied that “he had felt a duty and desire to contribute something to the development of musical art in his home country”.

Hence, Fran Gerbič took up all three positions in Ljubljana in 1886, extensively using his experiences obtained abroad. He became the head of the music school at the Music Society (Glasbena matica), teaching singing, the piano and harmony and conducting its occasional choir. He also took over the men’s cast at the Reading Society (Narodna čitalnica). But he did the most at the Drama Society (Dramatično društvo), where he strived to introduce operas. He planned the first opera, “The Sleepwalker”, for the end of January 1887. When it was scheduled to be performed for the second time, the Ljubljana Theatre burned down the night before (16 February). Hence, he had to work further in completely impossible working conditions. Fortunately, Ljubljana got a new theatre building 5 years later, where Gerbič proved himself 4 days after the opening ceremony by staging the opera “In the Well”. He participated in operas until the 1895/96 season. He conducted singing at the National Reading Society until 1890. However, he stayed loyal to the Music Society, where he taught for almost quarter of a century by 1910.